Directed by local lad Shane Meadows, this was my first time watching this British classic, and I have to admit to being pleasantly surprised at how good it actually was. It’s one of those movies I foolishly admitted to not having seen before, and I have to say the amount of flack I copped for this admission was unbelievable, so I had to correct this oversight and fast, and i’m so glad I did.

For those of you, like me up until now, not familiar with the story it goes something like this. It’s 1983 and Shaun is 11 years old. He’s a bit of a misfit, he’s bullied at school and lives with his single Mum, his Dad having been killed in the Falklands war. After a particularly bad day at school, walking home he has a chance encounter with the local fun and friendly skinhead pack. He’s taken under their wing, and grows close to them, particularly their leader, Woody. The gang give him a makeover, shaving his head and dressing him in jeans, Ben Sherman shirts

and braces, he finally feels like he belongs to something.

All goes well, and he embraces the life of parties and girls which they introduce him to. Life is good…….

Enter Combo, a towering performance by Stephen Graham. Combo is a radical skinhead, who looked after Woody during a brief stint in prison, and is everything that Woody isn’t. He’s bitter, dangerous, aggressive, militant, racist as hell and an ardent follower of the National Front.

He gatecrashes one of the gangs parties, with a couple of mates, and invites the lads at the party to his flat the following day. Much against their better judgement they decide to take him up on the offer. At this meeting he recruits a couple of Woody’s gang to his cause, including young Shaun, and this is where things rapidly go downhill for all concerned. The new recruits are taken to National Front meetings and rallies, they are also forced to engage in some truly awful racist behaviour against the local Asian community. There’s an extremely nasty sequence which involves the persecution of a local shop owner, truly shocking and brilliantly performed by Stephen Graham.

Just when you think it can’t get any worse we have the final scene to contend with. A horrifying explosion of senseless violence, which has to be seen to be believed. It literally shocks you to the core.

This is British movie making at its absolute best. It’s thought provoking and shocking at the same time. It’s a real sucker punch of a movie, and it really rubs your nose in the nastiness that was Thatcher’s Britain in the early 80s. Unemployment and poverty ran alongside the yuppy culture, creating a Britain, that for most, wasn’t that good. The film also has an awesome soundtrack of Ska classics, by the likes of Toots and the Maytals, Dexy’s Midnight Runners, Strawberry Swichblade and Jimmy Cliff which give the movie a very authentic 80s feel.

The performances by all concerned are excellent, but special mention must go to Thomas Turgoose who plays Shaun, and Stephen Graham, for his utterly terrifying portrayal of Combo, a truly awful man, who personifies everything that was wrong with the 1980s.

This is definitely not a movie i’d rush to watch again, but i’m so glad I have it in my collection. I’m also looking forward to watching the three series which followed, This Is Britain 86, 88 and 90, which were all received well by critics, and fans of the movie alike, and i’m told as good, if not better, than the movie. Lets see shall we…..

No votes so far! Be the first to rate this post.

This was the first horror double bill I ever saw. I was 15 years old when this was screened at Burton Odeon. Went with some schoolmates for the evening showing.

Curse Of The Werewolf

Caught up with this Hammer classic this week.....

Coming Soon To The RetroMovieZone Rialto.....

The first "x" rated movie ever to win the Best Picture Oscar in 1968.

If you went to cinema's in the 70s this is what you saw before the film started. The "AA" certificate was the equivelant of the current "15" now but meant that only over 14s could be admitted....

The Best Movie Magazine On The Planet

The new kid on the block and a worthy addition to my monthly collection of film magazines. Click on the image to subscribe on the Filmhounds website. You won't be disappointed..... 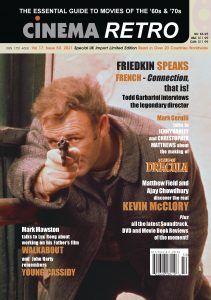 This is by far the best movie channel on television. The selection of classic British movies screened is second to none. It's the place to watch the kind of films you just don't see anymore.

“Fasten your seatbelts – its going to be a bumpy night”

If you recognise the movie and the star who delivered that famous line leave a comment or message me on the Retromoviezone Facebook page.

This website uses cookies to improve your experience while you navigate through the website. Out of these cookies, the cookies that are categorized as necessary are stored on your browser as they are essential for the working of basic functionalities of the website. We also use third-party cookies that help us analyze and understand how you use this website. These cookies will be stored in your browser only with your consent. You also have the option to opt-out of these cookies. But opting out of some of these cookies may have an effect on your browsing experience.
Necessary Always Enabled
Necessary cookies are absolutely essential for the website to function properly. This category only includes cookies that ensures basic functionalities and security features of the website. These cookies do not store any personal information.
Non-necessary
Any cookies that may not be particularly necessary for the website to function and is used specifically to collect user personal data via analytics, ads, other embedded contents are termed as non-necessary cookies. It is mandatory to procure user consent prior to running these cookies on your website.
SAVE & ACCEPT